La zi Ji or Chicken with chillies is certainly not one of the more complicated or more ‘interesting’ Sichuan dishes on offer in the fantastic Sichuan Cooking cookbook by Fuchsia Dunlop (who is the expert on Sichuan cooking in the western world). That said, it was, for me at least, a great way of getting into trying to make more of the dishes in her cookbook and also generally improving my Chinese cooking!

One of the reasons I chose to have a go at chicken with chillies was that I have eaten it before at a Leeds Chinese restaurant and so had an idea of what flavours I should be aiming for. I also knew that the chilli element was not as strong as you might fear when reading the recipe and looking at images of the dish! With this in mind, we set out on our quest to find the ingredients.

Getting dried Sichuan chillies was the real challenge, so any tips as to where to get them from would be most welcome! We ended up getting ours from Oriental City in Leeds but while they stocked them they were not particularly helpful in helping us to differentiate which were Sichuan and which were Thai and seemed quite confused as to why we were not buying the peppercorns and instead wanted the actual dried chillies! Suffice to say that there must be better options out there!

Once we had collected everything we needed, it became apparent that this is not a hugely expensive dish to create as most of the main elements are either ones you can use in a range of dishes (e.g. ginger) or are long lasting and used in a lot of Sichuan dishes (e.g. Shaoxing wine). Also, I had previously tweeted Fuchsia Dunlop in advance for a recommendation regarding a substitute to groundnut oil (peanut oil basically) as I have a severe allergy. She, very helpfully, said that she now uses organic rapeseed oil as an alternative. 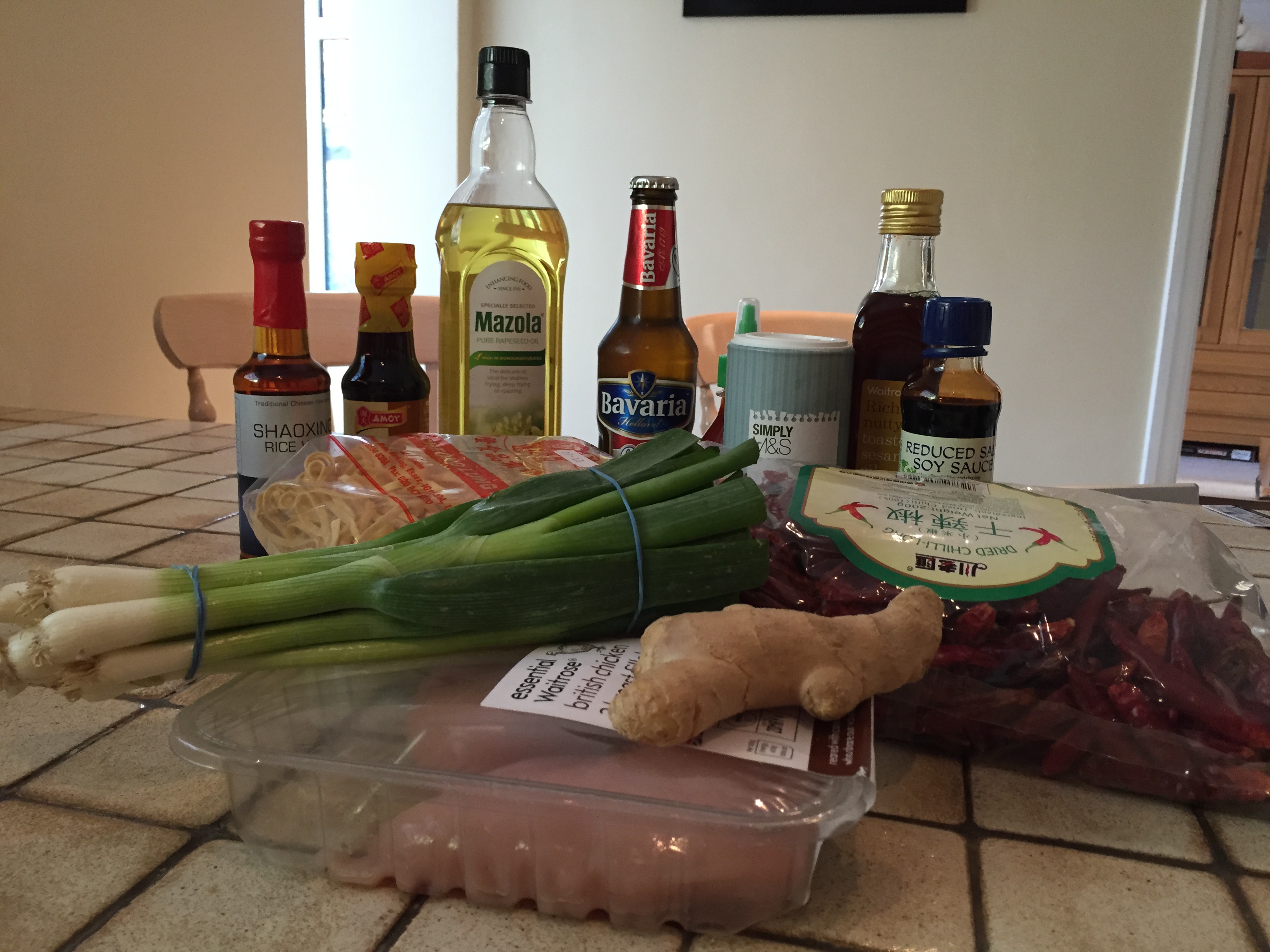 What you need to get cracking!

The cooking of the dish itself seemed to be all about the preparation and getting the chicken marinading for the full 30 minutes. With this in mind, you need to get the marinade measured out and ready nice and quickly and get your chicken cut up into roughly 2cm cubes so as to make sure that it cooks evenly. The rather sweet smell of the Shaoxing wine might seem overpowering but trust me it is perfectly balanced once cooked. 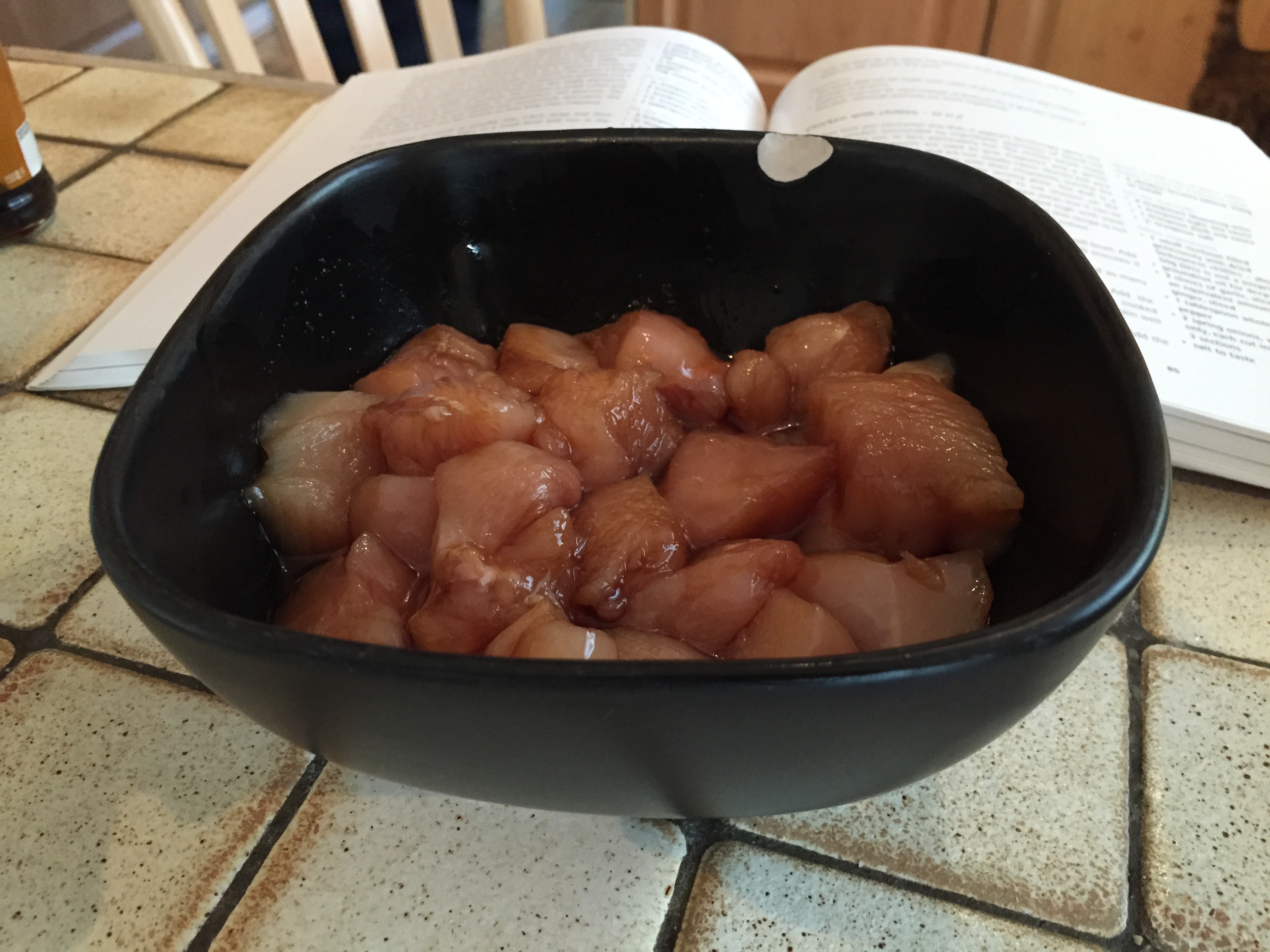 After you have done this, you then need to get chopping the 50g of dried chilli! This might seem absolutely ridiculous but you de-seed the chilli and you can keep in the back of your mind that you are not meant to (though Charlotte had a few!) eat the chillis once the dish is cooked. While this was a laborious job, it is a nice task to get other members of the family to help with. 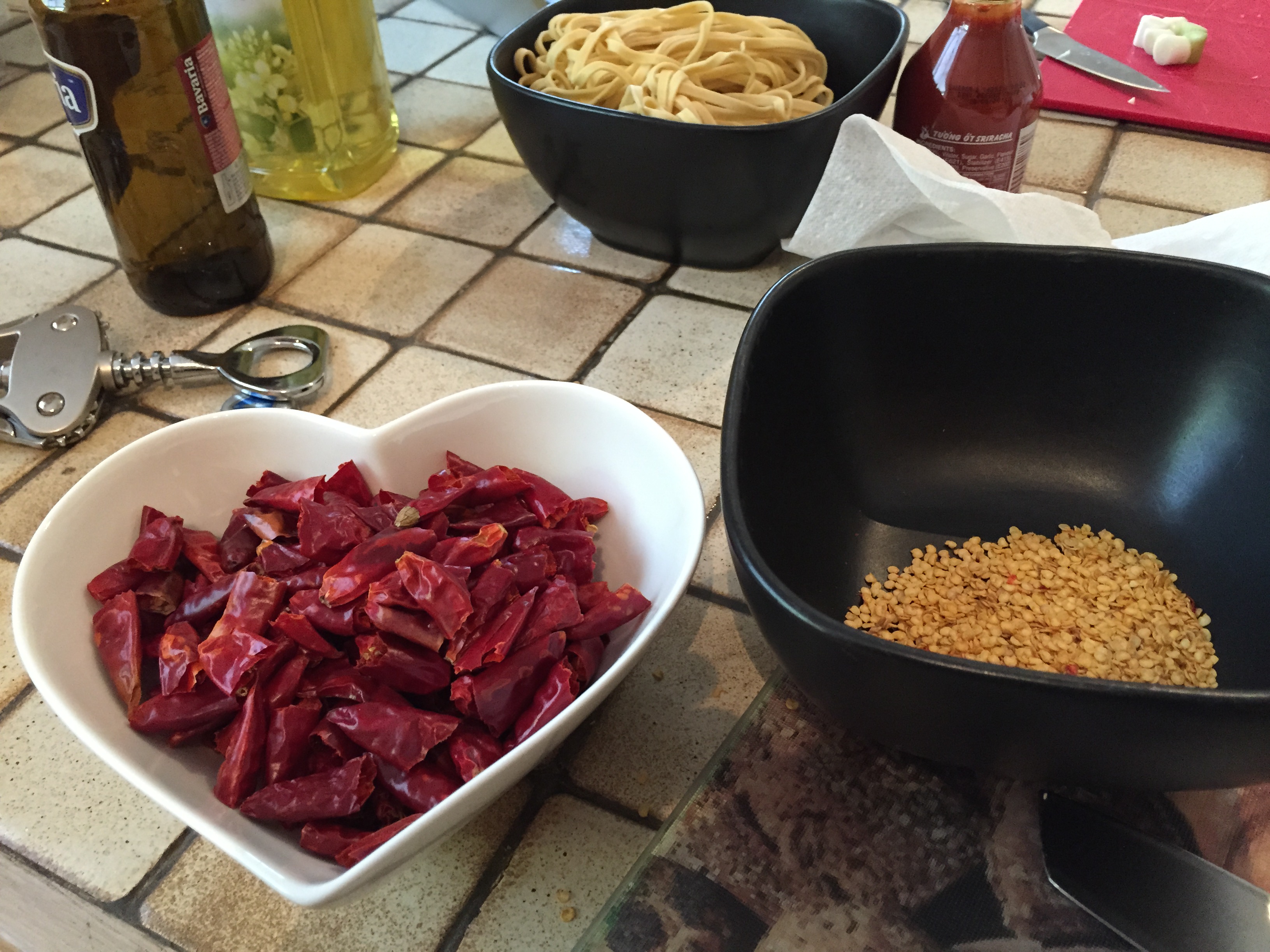 Enough chilli for you!?

After you have done this, I would suggest getting the Sichuan peppercorns ready and measured out as you won’t have time to do this mid-cooking. Chop up your garlic, ginger and spring onions and have some salt and sugar ready on the side. Get your sesame oil open and ready to use as well. Finally, get some bowls (one for pouring oil into) and any sides you are going to be enjoying ready. For me, that meant getting some medium thickness egg noodles soaking in warm water ready to go into the wok so as to avoid a delay and letting the food go cold and also putting our spring rolls (shop bought I’m afraid!) into the oven.

Doing all this in advance may sound excessive and may not seem like something that you ‘need’ to do but trust me you really, really do need to get all this ready! Once you start the cooking process you are hovering over the wok and are not really able to do anything except check that everything is cooking okay.

When I started cooking, I got the rapeseed oil nice and hot so as to make sure the chicken went a golden colour and again I would say that not rushing in and waiting a while here is key to avoiding soggy food! The fabulous aromas that came from the food were wonderful as the pieces of chicken deep fried and I think it was at this point that we knew the dish was going to be a tasty one! After about five minutes the chicken was done (I used chicken breast off the bone; on the bone might take longer) and I poured the excess oil into one of my spare bowls while putting the chicken into another one so as to use it again later in the dish. 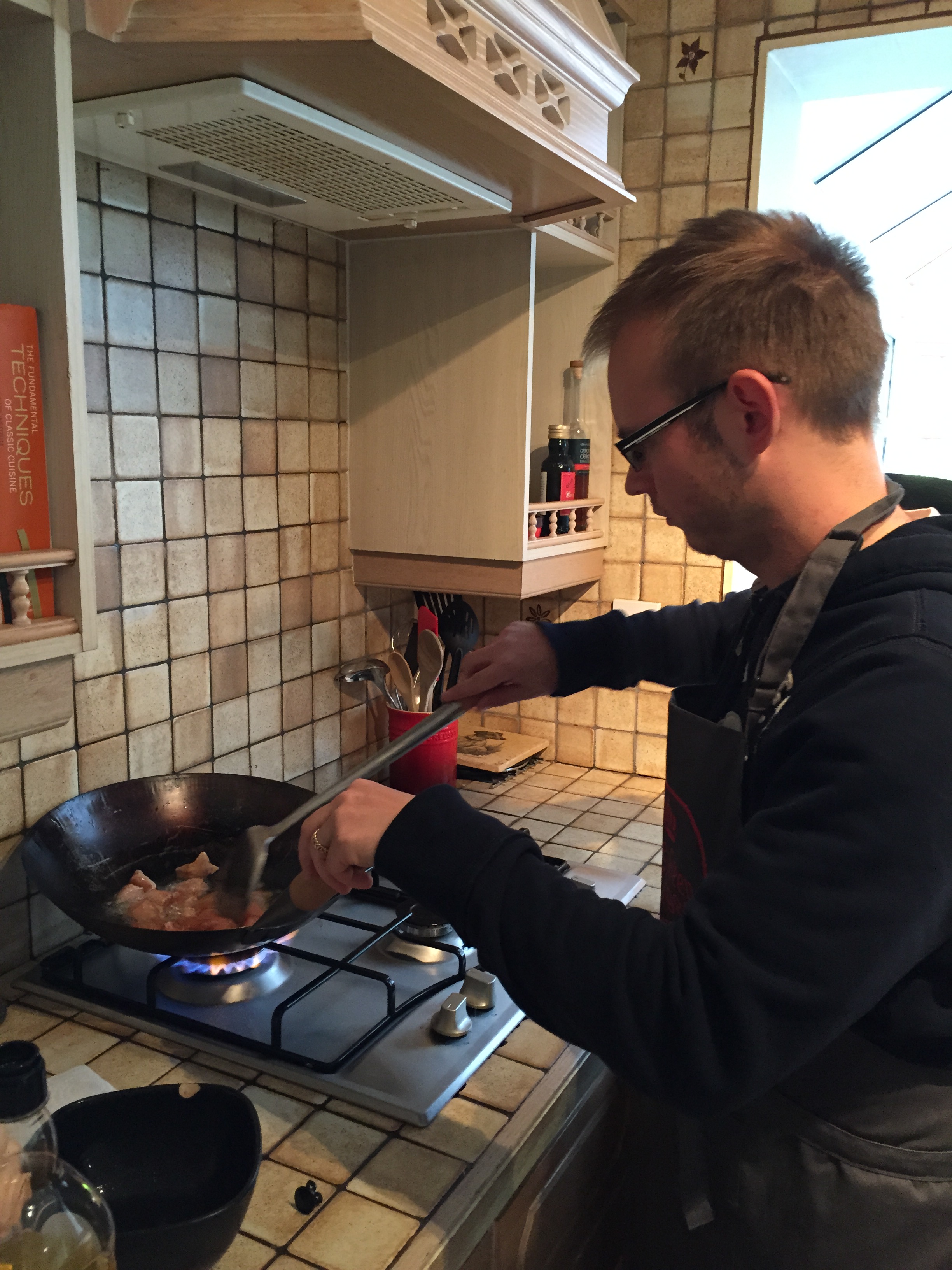 Straight after this, I wiped down the wok and got cracking with three tablespoons of rapeseed oil shoved into the wok over a medium flame. I then threw in the garlic and ginger until I could smell them cooking and starting to go golden and then flung in the chillies and peppercorns for about 20 seconds before adding in the spring onions and chicken (from earlier) into the mix with a nice pinch of sugar and a tiny bit of salt. Once the chicken was coated in the lovely smelling oil that had taken on the flavour of everything in the wok I took it off the heat and stirred in some sesame oil and put it in a serving bowl. It looked and smelled amazing! 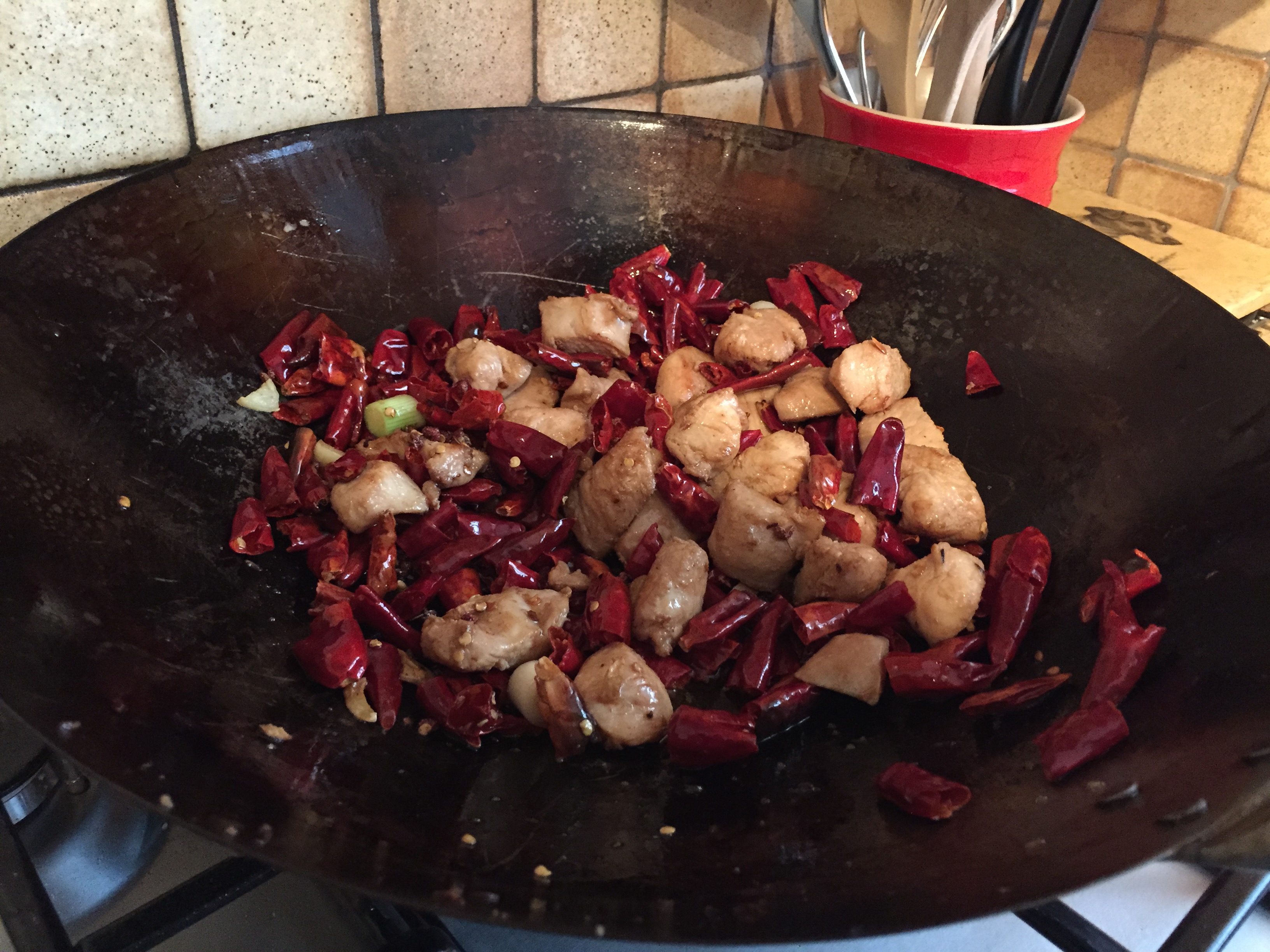 The final moments in the wok

I then popped my pre soaked noodles into the same wok with a few chilli flakes (alas I had no bean sprouts) and fried them to make some nice crispy noodles before pouring them rather ungracefully onto our plates!

As they say, the proof is in the eating and a deathly silence enveloped our table as we both got so enthused with stuffing more of the spicy but aromatic food into our mouths that we seemed to finish the dish almost as soon as we had started it! All in all, the dish itself was truly very tasty and was not that tricky to cook thanks to clear instructions and simple processes.

I think we shall be enjoying this dish again in the future and may start to try a few more ‘adventurous’ dishes from the cookbook as well!

In terms of the cookbook itself, everything is described very clearly by Fuchsia, and there are helpful introductions to each dish that allow you an insight into what you’re about to make. 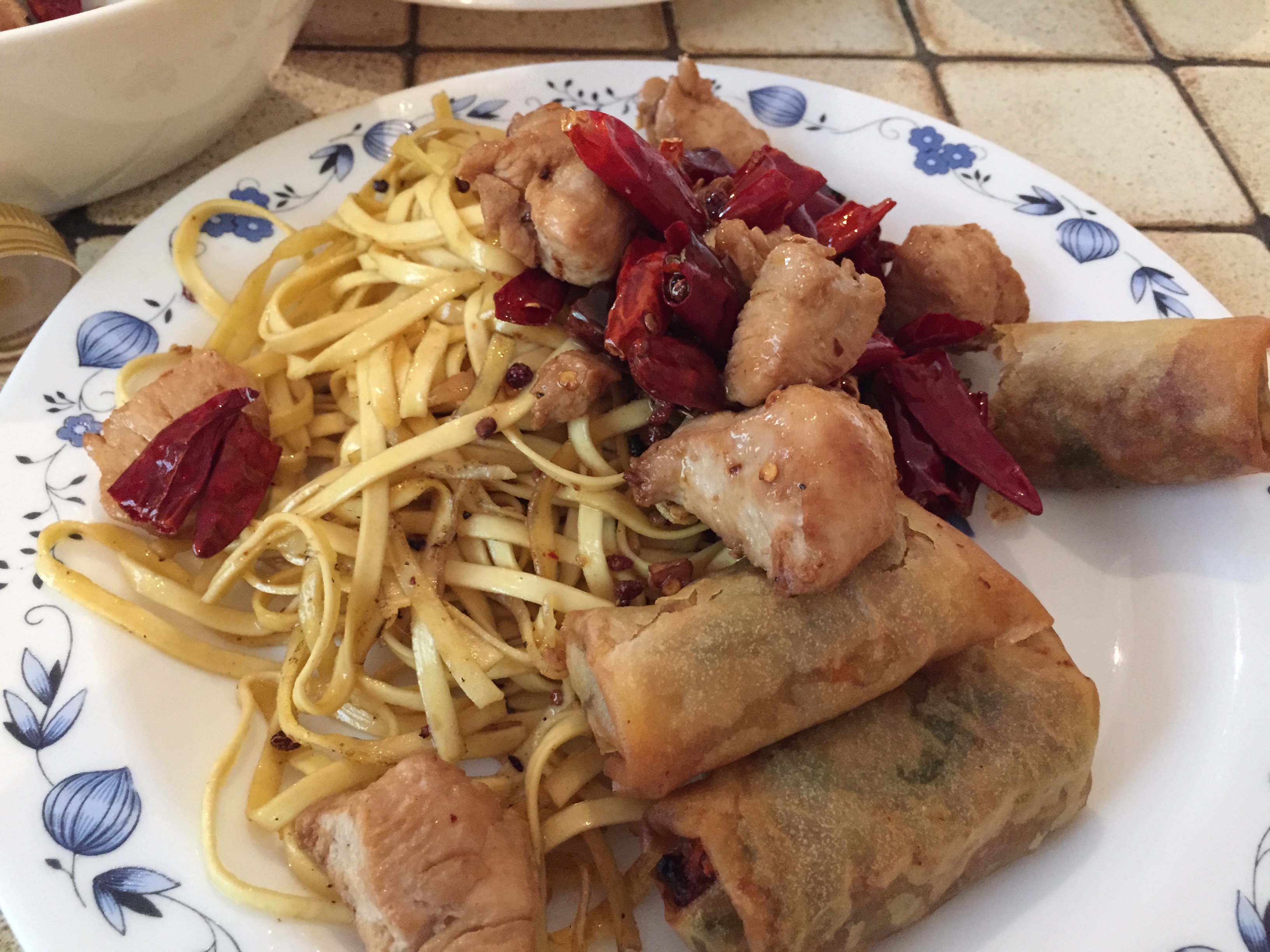